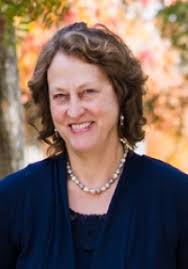 Rev. Robyn Plante is an ordained Unity minister and long-time Unity student. She previously served at Silent Unity in Missouri, as well as at Unity of Oroville and Unity Center of Davis in northern California. A graduate of Carlsbad High School, Mira Costa College, and San Diego State, Rev. Plante returned to the Carlsbad area to be near family.

Prior to entering ministry, she enjoyed a career in education as a teacher of English and Creative Writing for teens and adults.  Her path includes a focus on the healing arts, which led her to become a Reiki Master, EFT practitioner, and certified massage therapist. Mind, body, spirit wellness continues to be woven throughout her message and teaching.

For the past 30 years, she has been a student of meditation, prayer, and evolving consciousness. As well as spreading the Unity message, she also enjoys work as a certified Conscious Aging Facilitator through the Institute of Noetic Sciences. This program complements Unity teachings.

Her mission is to provide a safe and sacred place for inner transformation through prayer, education, joyful connection, and sacred service. 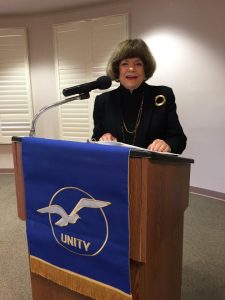 Rev. Cathy Ellicott Carver, Associate Minister, is an exciting speaker with a crisp sense of humor and a multi-talented former TV personality.

Rev. Cathy brings quite a background to Unity of Carlsbad. She has a BA from Notre Dame, and she did her graduate work at Loyola University, University of North Florida and Jacksonville University School of Management.

After ordination, Rev. Kathy Ellicott served as Senior Minister in Carlsbad for eight years. She also wrote a column for the Blade Tribune Newspaper during that time. In an article about Rev. Kathy Ellicott (now Cathy with a “C” and her married name “Carver”), one of the members of her congregation described her as a “synthesist”: “She brings Science, Philosophy and Sci Fi together showing their oneness — with spontaneous humor. She proves there are many paths to the top of the Spiritual Mountain, but only ONE destination.” After her resignation, she returned to broadcasting as Host and Producer of the TV show “Open Mind,” which aired nationwide. After her husband died, she was drawn back to her spiritual calling, and served as Minister Emeritus with Rev. Ray Wiggins for five years, again at Unity of Carlsbad. For the last few years, she has served this same church as Associate Minister to Rev. Sharon Connors.