When most people think of prayer, they think of asking God for something.

Not so in Unity.

Unity uses “affirmative prayer.” Rather than begging or beseeching God, this method involves connecting with the spirit of God within and asserting positive beliefs about the desired outcome. Affirmative prayer is the same method of prayer Jesus taught when he said, “So I tell you, whatever you ask for in prayer, believe that you have received it, and it will be yours” (Mark 11:24).

If, for example, one were to pray traditionally, one might say: “Please God, help me find a job.” By contrast, an affirmative prayer might be: “I am now guided to my right and perfect employment.”

Affirmative prayer reflects the certainty that we are each being led to our highest good, despite any temporary appearances.

Metaphysicians believe that thoughts transmit magnetic energy and this energy attracts other energy of the same frequency. Whether you are conscious of it or not, your thoughts are transmitting energy that is attracting more of the same. When you remain focused on your intentions, you will draw those things into your life.

“In Unity, we believe that all things work together for our highest good,” says Lynne Brown, vice president of Unity’s 24/7 prayer ministry called Silent Unity. “We pray to align ourselves with God and to allow ourselves to be inwardly guided to that good. Through affirmative prayer, we help co-create the good that is possible in our lives.”

By using an affirmative prayer approach, we can visualize and plan for the future with faith that the power of God is continually blessing our lives with unlimited possibilities. Affirmative prayer leads to an awakening of our spiritual selves. In faith, we pray giving thanks in advance that the Universe is meeting our every need. 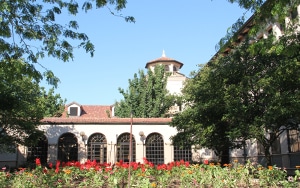 Silent Unity, the worldwide prayer ministry of Unity, has been praying with people seeking spiritual support for 125 years. The 24/7 prayer ministry — which responds to prayer requests via telephone, postal mail, online, or via the uPray free mobile app — serves people of all faiths from all parts of the world.

Silent Unity prays affirmatively, believing that God is everywhere present and active in and through all lives, and serves with sensitivity, compassion, and confidentiality. From the moment a prayer request is received, the sender is lovingly enfolded in prayer. After a response has been provided, the prayer request is placed in the Silent Unity Prayer Vigil Chapel, where prayer is continuous, for 30 days.

In the sacred space of the Prayer Vigil Chapel, located beneath the light beaming from the cupola of the Silent Unity Building at Unity Village, all prayer requests are enfolded in prayer. Here someone is praying 24 hours a day—praying as a kindred spirit, in a consciousness of oneness with God.

The ever-shining light in the Silent Unity cupola is a reminder that you are never alone—not even in your darkest hour. Silent Unity is as close to you as a prayer. It is the light that shines for you!

The Silent Unity prayer ministry is supported primarily by freewill offerings. Every prayer request is held sacred and confidential and receives the same loving attention, regardless of donation or ability to donate. No matter how you contact Silent Unity, you will first receive personalized prayer and then a letter of support.